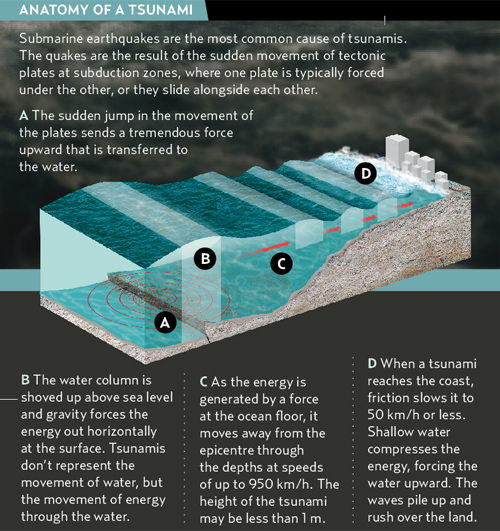 "Tsunami" is a Japanese word in which "tsu" means harbor and "nami" means wave. Thus the word means "harbor wave."

A tsunami is a series of waves of extremely long wavelength that are usually caused by a strong disturbance of the water, such as an underwater earthquake, landslide, or volcanic eruption but a meteorite can also cause a tsunami.

The waves travel outward in all directions from the disturbance, similar to what you would see if you threw a rock in a pond.

The average wave speed is 450 miles per hour.

Tsunami waves differ dramatically from traditional waves in that the tsunami waves have great depth, extending from the ocean floor the to water’s surface. The height above the water may be only a few inches, but the huge wave is actually hidden in the water below.

Traditional surface waves, such as those you would see at an ocean coastline, are shallow waves and they are caused by the gravitational pull of the moon, sun, and planets, or by wind.

Because of the great depth of the tsunami waves, when they hit the coastline their height may increase from a few inches to tens of feet. And the tremendous speed of the waves (about 500 miles per hour) can carry the tsunamis a great distance onto land, flooding areas, destroying structures, and injuring or killing people.

The sequence below illustrates how an underwater earthquake disturbs the water and causes a tsunami.

A hurricane is a HUGE storm It can be up to 600 miles across and have strong winds spiraling inward and upward at speeds of 75 to 200 mph. Each hurricane usually lasts for over a week, moving 10-20 miles per hour over the open ocean. Hurricanes gather heat and energy through contact with warm ocean waters. Evaporation from the seawater increases their power. Hurricanes rotate in a counter-clockwise direction around an "eye." The center of the storm or "eye" is the calmest part. It has only light winds and fair weather. When they come onto land, the heavy rain, strong winds and large waves can damage buildings, trees and cars.

Tornadoes are very violent storms. They are funnel shaped clouds hanging from a dark cloud mass. Another name used for tornadoes are twisters.Tornadoes form in thunderclouds,where strong updrafts of air come close to an unusually strong downdraft. During most violent storms is when this tends to happen,often at cold fronts,where warm air is forced to rise quickly. Tornado,the word itself,comes from the Spanish for thunderstorm, tronada. The strong updrafts leave a low pressure area in the cloud. Air rushes into replace the updrafts and evens out the pressure. Because the updrafts are so strong, the incoming air is all warmer air from below, which strengthens the updrafts even more. As it streams in and up,this air twists the already soaring air into a spinning spiral.

Scientists have not fully Scientists have not fully understood the mechanism of lightning. We can describe the process of lightning, but many phenomena of lightning have not been explained. According to observation, the upper part of a cloud carries positive charge, while the lower part carries negative charge, therefore the ground is induced with a large amount of positive charge. The potential at the bottom of the cloud is much lower than that of the ground, therefore negative charge will be accelerated towards the ground. When lightning begins, a "step leader" comes from the cloud to the ground. The step leader is not very bright, but it propagates at a high speed. First, it propagates for about 50 m, stops for a while, then proceeds in a different direction, and stops again. The process repeats many times, making a zigzag path filled with negative charge. High speed electrons ionize air, thus providing a conducting path for the stoke. When the step leader comes close to the ground, a strong electric field is created, which drives the positive charge on the ground to neutralize the negative charge in the path. The discharge releases an enormous amount of energy, and it is called the "returning stoke". The returning stoke is much brighter than the step leader, so what we see at lightning is a discharge which actually goes from the ground to the cloud! The returning stoke is the origin of the strong light, heat and sound in lightning.

But the story has not finished. Very shortly after the returning stoke disappears, another step leader comes from the cloud. This time the leader does not pause, it propagates straight to the ground, following the path of the first leader. The process of discharge repeats many times, even up to several tens times. Why is lightning so interesting? Perhaps nobody knows the answer.

Hail is precipitation that is formed when updrafts in thunderstorms carry raindrops upward into extremely cold areas of the atmosphere and freezes into ice. Hailstones grow by colliding with super cooled water drops. Thunderstorms that have a strong updraft keep lifting the hailstones up to the top of the cloud so they continue to grow. The hail falls when the thunderstorms updraft can no longer support the weight of the ice. The stronger the updraft, the larger the hailstones can grow.

When water inundates land that is normally dry, this is called a flood. Floods can be caused by a number of processes, but the dominant cause in Australia is rainfall. Floods are a natural process, but mankind’s activities affect flooding. Floods occur at irregular intervals and vary in size, area of extent, and duration.

The AMBER Alert™ Program is a voluntary partnership between law-enforcement agencies, broadcasters, transportation agencies, and the wireless industry, to activate an urgent bulletin in the most serious child-abduction cases. The goal of an AMBER Alert is to instantly galvanize the entire community to assist in the search for and the safe recovery of the child.

Once law enforcement has been notified about an abducted child, they must first determine if the case meets their AMBER Alert program’s criteria. The U.S. Department of Justice recommends the following criteria for issuing an AMBER Alert:

There is reasonable belief by law enforcement an abduction has occurred

The abduction is of a child age 17 years or younger

The child’s name and other critical data elements, including the Child Abduction flag, have been entered into the National Crime Information Center (NCIC) computer

If these criteria are met, alert information is assembled for public distribution. This information may include descriptions and pictures of the missing child, the suspected abductor, and a suspected vehicle along with any other information available and valuable to identifying the child and suspect.

Alzheimer’s disease is an irreversible, progressive brain disease that slowly destroys memory and thinking skills and, eventually even the ability to carry out the simplest tasks of daily living. In most people with Alzheimer’s, symptoms first appear after age 60. Alzheimer’s disease is the most common cause of dementia among older people.

The disease is named after Dr. Alois Alzheimer. In 1906, Dr. Alzheimer noticed changes in the brain tissue of a woman who had died of an unusual mental illness. Her symptoms included memory loss, language problems, and unpredictable behavior. After she died, he examined her brain and found many abnormal clumps (now called amyloid plaques) and tangled bundles of fibers (now called neurofibrillary tangles).

Plaques and tangles in the brain are two of the main features of Alzheimer’s disease. The third feature is the loss of connections between nerve cells (neurons) in the brain.

Although treatment can slow the progression of Alzheimer’s and help manage symptoms in some people, currently there is no cure for this devastating disease.